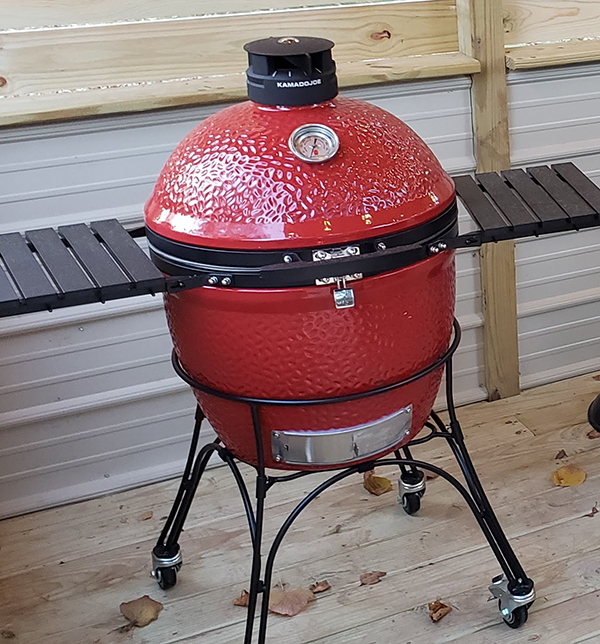 What is a kamado grill? Not to be confused with a komodo dragon (one of them breathes fire, and it's not the dragon), the kamado-style grill is based on a ceramic cooking vessel that dates back 3,000 years, making it one the oldest known styles of cooking. Around 1,300 years ago, clay or ceramic cookware was introduced to the people of Japan, who over time refined the clay pot by adding a removable domed lid. It is believed that the Japanese also introduced the cooking grate to this type of pot, making it the precursor to the modern kamado grill. The Japanese called this cooker a “mushikamado.” The mushikamado was introduced to Americans shortly after World War II and became known as “kamado,” which means “stove” in Japanese.

What is a kamado grill known for?

Although the exteriors of modern kamado grills are often a flashy red or green powder-coated cast aluminum, the interiors are still generally made of ceramic materials, which allow for excellent heat retention and make them very versatile and great for grilling, smoking, and even baking. The heat retention allows for a more efficient use of charcoal, and the ability to hold heat better also allows meat to hold moisture better. When the grill is opened during a cook, it will regain its temperature more quickly than a kettle grill does, once the lid is closed again.

Because of that heat retention ability, kamado grills can reach temperatures as high as 750 degrees Fahrenheit. The high heat and the venting system allow them to function similarly to a wood-fired oven. Being able to reach such a high temperature is perfect for grilling a pizza by quickly expanding and trapping the air bubbles that make that lovely, light and crispy crust.

Where can I buy a kamado grill near me?

Availability will vary by location, so you may need to shop around, but the following retailers are worth checking. Shopping locally might save you on some shipping costs!

Which is the best kamado grill?

There are many brands of kamado grills, but I can only speak to a couple. I am the relatively new owner of a Kamado Joe 18” Classic II Grill and Smoker, which is very similar to another very popular ceramic grill, the Big Green Egg. Although both grills have great reputations and very loyal followers, I personally chose the Kamado Joe over the Big Green Egg for a few specific features. The first thing that I love about Kamado Joe is the Divide & Conquer grill grate system. The cooking grill grate is essentially split into two halves that can be split to sit on separate levels. This feature is awesome when cooking two different foods that need to cook at different temperatures. The Kamado Joe also comes with two half moon-shaped heat deflectors that work together with the Divide & Conquer grill grate system so that you can use indirect heat on half of the grill and direct heat on the other half.

The second feature that I particularly like on the Kamado Joe is the lid hinging system. The lid is very heavy, but the Joe’s mechanism allows me to lift the lid with one finger — and, more importantly, it supports the lid to keep it from falling shut too quickly.

The last piece I’ll mention is the wire mesh fiberglass gasket that the Kamado Joe uses, along the edge where the lid meets the rest of the grill. The double-thick gasket provides a nice cushion for the lid and a superior air-tight seal for retaining heat.

Ceramic grills, in general, are very heavy (my model weighs in at approximately 188 pounds). They are generally sold with a sturdy rolling base, but for safety’s sake I would recommend establishing a place for it to live and leaving it in one spot as much as possible.

Where can I buy a kamado grill near me?

Availability will vary by location, so you may need to shop around, but the following retailers are worth checking. Shopping locally might save you on some shipping costs!

Is a kamado ceramic grill worth its cost?

A ceramic grill does have a much higher price point than a kettle grill (my Kamado Joe 18” Classic II Grill and Smoker currently sells for approximately $1200), but it can be a worthy investment for someone who grills frequently, likes to grill a variety of different kinds of foods, and who does not need the portability offered by the kettle grill.

I recommend a kamado style grill if you want to “elevate” your grilling game by experimenting with the Divide & Conquer system’s flexibility, or if you just want the best kind of grill for very high heat and excellent heat retention. With proper care, a kamado grill can last a very long time and can provide a great return on your investment.

Check out Related Pages below for other backyard grill types.

My related pages: Types of Grills 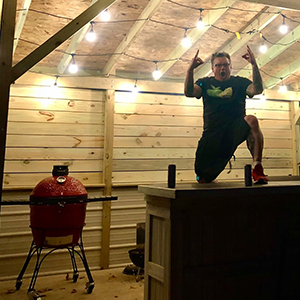 Some evening fun in my backyard grillscape